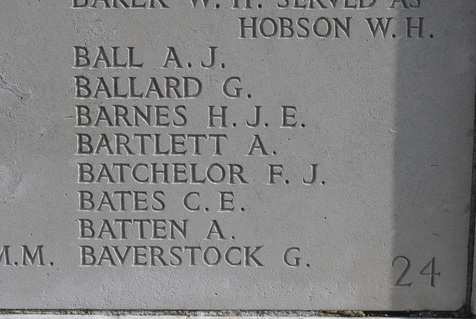 ​Frederick was born in Buckingham in 1888, his birth being registered in the last quarter of the year.

His family were shown as living in Fringford for the 1891, 1901 & 1911 Censuses. In 1911 his father Robert was 51 and a bricklayer, mother Annie, 50, brother Henry, 24 and a bricklayer, Frederick, 22 a garden labourer and a younger sister, Annie born in Fringford in 1894. She was 17 and working as a domestic for Major Arthur and Grace Dewar at Hethe House, Hethe.

It has not been possible to trace a marriage record, but it is believed that Frederick married Mable Annie in 1911.

Frederick was to answer his countries call and enlisted into the 1/8th Royal Warwickshire Regiment on 17th December 1915 as a Private, service number 306529. On enlistment he gave his address as Fringford and his employment as a gardener. He was 5’ 3” tall with a 36” chest expanding by 3”. Frederick was under training in the UK until he deployed to France on 11/6/1916.

Frederick was killed in action on 27th August 1917, but has no known grave. He is commemorated on the Tyne Cot memorial in Belgium. The commonwealth war graves listing shows his parents Robert and Anne living at Green Farm Fringford.

A pension record survives for Frederick and it details the property returned to his wife, Mable Annie Batchelor at Brompton Villa, The Pitchings, Wroughton. All that Mabel had to remember her husband by were, letters, photographs and a leather wallet. He is also remembered on the war memorial at St Michael's and All Angels Church Fringford, Oxon.
Powered by