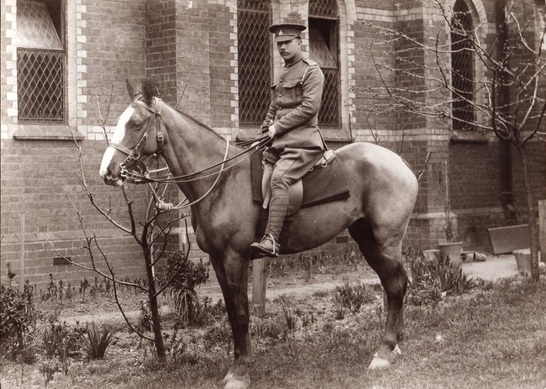 Alfred was born on 20th March 1884 in Fringford. His father, Henry Thomas Waring, was an agricultural labourer and his mother was Jemima (nee Smith.)


The 1891 census lists them as living in Fringford with an addition of a brother to Alfred – Frederick aged 3. The surname is spelt Wareing in this census.

By 1901 Alfred had left the family home and was working at the Crown hotel in High Street Brackley. The proprietor was Charles Letherbarrow, 66. Charles wife was Sarah Ann, 57 and his son Bernard, 24, was a barman. They were employing two ostlers (a man employed to look after the horses of people staying at an inn) - Harry Butler, 18 and Alfred Waring, 17.

In 1908 Alfred, 24, married Mary Matilda Hawkins. Mary was 43 when they married and already had 3 children.

In 1908 Alfred and Mary had a son named Henry George.
By 1911 they had all moved back to Fringford and Alfred was now employed as a domestic groom. Mary’s children were living with them: John Lord, 15, a house boy, together with Edwin Lord, 11, and Horace Lord, 9, who were both at School. Henry George Waring, was 2.

There are no military records remaining for Alfred but we know that he was Trooper 968 in the Royal Bucks Hussars. His medal index card shows him entering the Egyptian theatre of war on 21st April 1915.


In August 1915, the regiment went into action in Gallipoli participating in the attack on Chocolate Hill, landing at Sulva on the 18th August (minus their horses). The plan for 21 August was to attack Scimitar Hill. Around 5:00 p.m. the troops of the 2nd Mounted Division were ordered forward from their reserve position on Lala Baba, near the beach. They advanced, marching in formation, across the bed of a dry salt lake. Before arriving under the protection of Chocolate Hill the men had to cross terrain of terrible burning scrub. By this time the air was clouded by mist and smoke so that they had little idea of where they were going. The 5,000 men of the five brigades formed in columns by regiment and, marching in extended order, were easy targets for the shrapnel shells. Most of them halted in the cover of Green Hill, west of Scimitar Hill. The British had no sight of their targets, which were obscured by mist and smoke, whereas the Ottoman artillery had a clear view of the entire Suvla battlefield and ample opportunity to register their targets. During this confusion Alfred Waring was killed on the 21st August 1915.

Alfred is remembered on the Helles Memorial, panel 16 & 17, on the Gallipoli Peninsula, Turkey and also on the war memorials at St Michael's and All Angels Church Fringford, Oxon and the memorial in Tingewick Cemetery.

At the time of Alfred’s death Mary was shown as living at Rectory Lodge, Tingewick, Bucks.